I have been looking to upgrade my home computer and after fixing my computer a number of times to get it running it finally gave up.  The PC I had was quite a big computer and was showing it’s age I had been looking around and had the Mac mini or the Intel NUC.   I had looked at others like the Asrock Deskmini 110 but after taking a long hard think and look at PC and went for the Intel Skull NUC.

In an effort to capture some of the lucrative gaming market, Intel has developed a new NUC aimed at enthusiasts and gamers with the Iris Pro Graphics 580. The Skull Canyon NUC6i7KYK is marketed for “intense gameplay,”.

Right out of the gate we can tell this won’t be a cost effective gaming solution — unless it can outperform a Radeon RX 480 — the barebones NUC6i7KYK sells for £569 and requires you to bring your own storage, memory and operating system, which could easily push the price beyond £1,000, as was the case with my build.  I purchased all mine from www.scan.co.uk 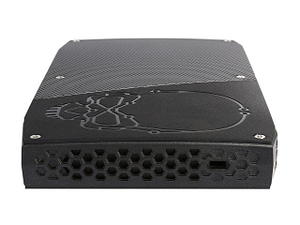 The NUC6i7KYK is without a doubt the best looking NUC I have seen even the Intel NUC i5. In fact, it might even be the best looking mini PC I have seen. The redesigned chassis looks very aggressive and you can tell Intel is trying to attract enthusiasts and PC gamers alike.
The NUC6i7KYK measures a mere 211mm wide, 116mm deep and 28mm tall (8.30″ x 4.56″ x 1.10″).
On top we find the Skull branded logo which Intel typically associates with its gaming-oriented products. The NUC features an all-black design garnished with a range of different textured finishes. The skull is etched into a matte section of the lid and adjacent is a large glossy area featuring a small honeycomb pattern.

For those not keen on the scary looking terminator-like skull, the NUC comes with another less intimidating plain panel. This panel gives the NUC6i7KYK a more professional look and will probably be preferred by those not looking to use the NUC as a gaming device.

From the front we find a slim but long panel which continues the design theme from the top. Starting from the left users will find a hexagon shaped power button which illuminates white when the device is active. Next we have an SD card slot which is handy for photography buffs and next to that are two USB 3.0 ports, one of which is a charging port. Finally, there is a headphone/mic jack and an IR receiver.

Both the left and right sides of the device are ventilated and measure 116mm deep and the right side features Kensington lock support.

Spinning around to the back we find a few important connectivity options, a Thunderbolt 3 port being the most notable. Users will also find an HDMI 2.0 port, Mini-DisplayPort 1.2 and another two USB 3.0 ports. There is also a Gigabit network jack, combo speaker/TOSLINK audio output and a 19v DC power input.

Underneath we find four rubberized feet and fixing points for VESA mount support and I should point out that the VESA mount plate and screws are included in the package. The underside of the NUC also provides access to the internals via the removal of four small screws.

Before we jump inside to take a look at the hardware I should also mention that the NUC6i7KYK comes with a 120w (19V @ 6.32A) power brick with a separate power cord to the wall. There is also a quick start manual that provides directions on how to add memory and SSDs to the unit.

Intel has ensured easy access to the internal workings of the NUC6i7KYK which is important as users will need to install their own SO-DIMM memory and M.2 SSDs inside before the device can be used. Once the bottom cover has been removed users get their first look at what lurks inside. That said what you’re seeing here is only half the story.

On the opposite side of the PCB we find the H170 PCH (Platform Controller Hub) along with the mighty Core i7-6770HQ processor and lest we forget Intel’s Wireless-AC 8260 WiFi adapter (802.11ac, dual-band WiFi with Bluetooth 4.2).

Getting back to the business side we find two unpopulated SO-DIMM slots supporting up to 32GB of DDR4-2133 memory. Therefore I filled them with a pair of 16GB G.Skill DDR4-2133 modules for good measure. Next you’ll find a pair of M.2 slots, both of which connect directly to the Intel H170 PCH using the PCIe x4 interface.
The M.2 slots support 80mm long SSDs and I populated it with Samsung SSD 950 Pro 512GB pre installed.  The dual M.2 slots do support RAID and it can be enabled at the BIOS level.

This means in addition to the £526 price for the Intel NUC6i7KYK itself, our test configuration also houses £120 worth of DDR4 memory and a £320 storage device. That pushes the total build cost minus software out to £1415 — quite a price indeed.

A big part of that cost is the Core i7-6770HQ processor which unlike the Skylake-U parts is a fully fledged quad-core chip boasting Hyper-Threading support. Despite its modest 45-watt TDP, the 6770HQ operates at a base frequency of 2.6Ghz and it can boost as high as 3.5GHz depending on the load. The L3 cache has been downgraded from 8MB to 6MB, but keep in mind you are getting that huge 128MB L4 cache as well. Also squeezed into the multi-chip module package design is the Iris Pro Graphics 580 graphics operating at between 350 and 950MHz.
The Thunderbolt 3 port that we found on the rear I/O panel supports external graphics adapters such as the Razer Core, though that device isn’t a cost effective means of boosting the NUC6i7KYK’s gaming performance as the enclosure alone costs £380. Still, if you happened to have such a device already for enhancing your laptop or something, then it could also be used in conjunction with this Intel NUC.
Unfortunately, I don’t have a Razer Core to test the performance but it’s concerning that Intel has connected the Thunderbolt 3 controller directly to the H170 chip rather than the Core i7 processor. This limits the graphics card to PCIe 3.0 x4 bandwidth as it must use the DMI 3.0 link between the CPU and the PCH, which could cripple the performance of discrete GPUs using the Thunderbolt 3 interface and therefore make it somewhat pointless.

Good Most powerful Mac ever Excellent design Keeps cool New Space Gray color is ace Bad Very expensive Non user-upgradable Magic Mouse 2 still frustrating The iMac Pro is Apple’s attempt to take back the workplace, and it’s come out swinging. Not only is it the most powerful Mac ever made, it’s managed to fit […]

The Alienware m15 is not the most exciting gaming laptop when it comes to raw power, but rather it’s exciting in its portability. Not to mention a full-sized keyboard and impressive battery life claims for a gaming laptop. Good Good starting price Full-sized keyboard Solid build quality Gaming performance on par with competitors Great battery […]

Good Seamlessly transitions between modes The best and biggest digital drawing board Impeccable build quality Bad All rearward ports Pricey proposition for most The ‘cheapest’ unit comes outfitted with a 6th-generation Intel Core i5 processor, 8GB of RAM, a 2GB Nvidia GeForce GTX 965M GPU and 1TB of storage. Meanwhile, if you want to max […]