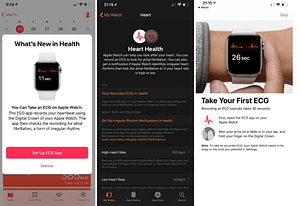 Apple is enabling its electrocardiogram (EKG) reading feature for Apple Watch Series 4 owners in Europe and Hong Kong today as we rumoured on Monday  The iPhone maker previously launched the EKG feature in the US in December, after making it a big part of the Apple Watch Series 4 that was originally introduced back in September. Apple is delivering the EKG functionality to regions outside of the US with its latest watchOS 5.2 update, including 19 countries in Europe and Hong Kong.

Apple Watch Series 4 owners will be able to enable the EKG reading through the Health app on their iPhones. To take an EKG, you open up the EKG app on the Watch and the rest your index finger on the crown. The Apple Watch then records an EKG and your heart rhythm and stores it in the Health app on your iPhone. You can then create a PDF report to send to your doctor with the results.

The ECG capability will only be available on the Apple Watch 4, as that has the electrodes built into the Digital Crown and rear of the Watch.

Google Maps has updated how you report new and missing roads on desktop, allowing you to draw them directly onto the map. Fortunately or unfortunately, depending upon your point of view there are some safeguards preventing you from just adding a giant penis-shaped “road” in the Australian outback. Previously when you added a missing road […]

Intel is officially launching its Lakefield processors today, its first chips to combine its Core i3 and i5 hardware together with low-power “Tremont” Atom cores. Officially, they’re called “Intel Core processors with hybrid technology.” The company is positioning Lakefield as the ideal hardware for incredibly thin laptops, like the revamped Samsung Galaxy Book S, as […]

Apple’s iOS 13.1.2 update addresses a camera glitch and other bugs

Apple already has another iOS 13 update, iOS 13.1.2. Apple released the update to the public. Apple released its third patch 13.1.2 to remedy several other problems that the previous updates overlooked. The newest version looks to fix a glitch with the progress bar on iCloud backups, a bug that renders the camera nonfunctional, an […]