The ZenBook Pro Duo has not one, but two 4K screens. (At least if you’re counting horizontal pixels.) There’s a 15-inch 16:9 OLED panel where you’d normally find the display on a laptop, then a 32:9 IPS “ScreenPad Plus” screen directly above the keyboard that’s the same width and half the height.

magine a MacBook Pro with a Touch Bar that expanded down towards the trackpad, pushing the keyboard below it. That’s pretty much what the ZenBook Pro Duo’s bottom deck looks like: A physical keyboard takes up the bottom half, with a 14-inch wide display sitting above it. 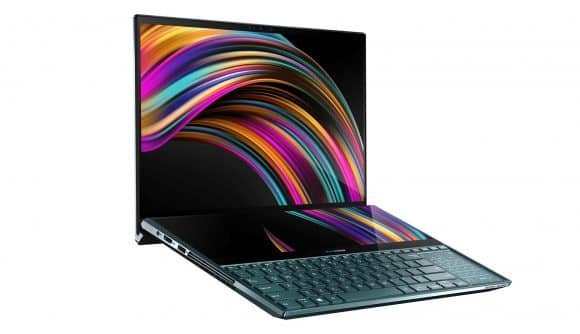 Asus has built some software for the ScreenPad Plus that makes it more of a secondary control panel, but you can also use it as a full-on monitor, or even two if you want to split it into two smaller 16:9 1080p windows. You can also set it to work as an extension of the main screen, so websites rise up from above your keyboard as you scroll down, which is pretty unnerving. Or you could use it to watch Lawrence of Arabia while you jam on Excel spreadsheets.

The ZenBook Pro Duo has up to an eight-core Intel Core i9 processor with an Nvidia RTX 2060 GPU. There are four far-field microphones designed for use with Alexa and Cortana, and there’s an Echo-style blue light at the bottom edge that activates with voice commands. It has a Thunderbolt 3 port, two USB-A ports, a headphone jack, and a full-sized HDMI port.

Performance seemed fine in my brief time using the ZenBook Pro Duo, without any hiccups or hitches even when running an intensive video editing software demo. It’s a fairly hefty laptop at 2.5kg (about 5.5lbs), but that’s to be expected given the gaming laptop-class internals. I would also expect its battery life to fall somewhere close to that particular category of products, though we’ll have to wait and see about that.

While both of the screens looked good, I will say they looked different. Part of that is because of the searing intensity of the primary OLED panel, but the ScreenPad Plus is also coated with a matte finish, and usually looks less bright because of how you naturally view it at an off angle.

ASUS is also offering a 14-inch option called the ZenBook Duo, which uses a Core i7 and a GeForce MX 250 GPU instead. It sports a full HD resolution on both the main display and its 12.6-inch ScreenPad Plus. ASUS hasn’t said if this model is headed stateside, but it does appear to be a more suitable option for those who want to try out the ScreenPad Plus but don’t want to splurge on a super high-end workhorse. That said, we don’t yet know how much either system will cost nor when they’ll be available, but I already know I really want to try one out in the real world, especially to find out how its battery holds up. After all, there’s an extra 14-inch screen to power.

Asus hasn’t announced pricing or availability for the ZenBook Pro Duo or the ZenBook Duo, but they’re expected to land in the third quarter of this year.

Apple finally includes a fast charger with the iPhone 11 Pro

Hacked Disney+ accounts are being sold on the dark web

Disney’s long awaited streaming service launched last week to much fanfare, notching an impressive 10 million subscribers on its first day. However, of those 10 million new customers, not everyone was happy; Disney+ launched with a slew of technical difficulties, and even the Disney+ website was knocked offline at one point. Technical woes tend to […]

A growing number of user reports online suggest some of Apple’s M1 Mac models are susceptible to a Fast User Switching bug that spontaneously activates the screensaver and leaves the user unable to dismiss it. A screensaver will suddenly take over the entire computer despite the fact that I never use a screensaver. And frustratingly, […]