Dell’s premium gaming brand at Computex 2019, the company is bringing that same design to its m15 and m17 laptops although unfortunately without the modular components of the Area-51m. The new design for the m15 and m17 borrows a lot from the Area-51m, to the point where the new laptops essentially resemble slimmed down versions of the flagship model. Keep in mind that they’re not that slim, though these are still Alienware gaming laptops, even if are the thinnest the company has ever made, they’re still pretty large machines. 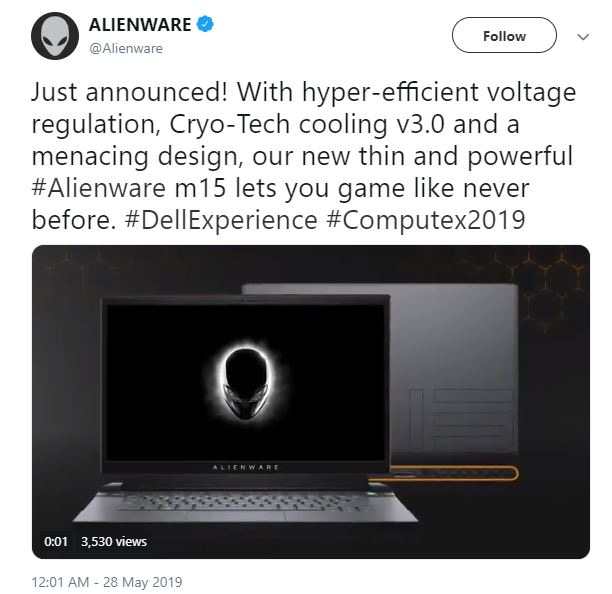 The new design marks the second major redesign for Alienware’s main line of laptops in less than a year the m15 was overhauled last fall, while the m17 was refreshed at CES but changes here aren’t just cosmetic: there’s a new keyboard with further key travel, despite the thinner case, and a new glass trackpad, along with updated specs that include Intel’s latest 9th Gen processors and Nvidia’s latest GTX and RTX GPUs.

Unsurprisingly Alienware is dropping in new 9th generation Intel Core processors including support for the 8-core Core i9-9980HK. Options for graphics range from the more budget-friendly NVIDIA GTX series up to the RTX 2080 with Max-Q design. Indeed, the RTX 2070 and 2080 configurations also have 8 and 6-phase graphics voltage regulation for higher sustained performance. New Cryo-Tech Cooling 3.0 technology brings increased airflow and thermal efficiency to keep things from getting too hot.

The 15-inch and 17-inch models are virtually identical, aside from screen size and display options: the 15-inch model will offer a choice of either 1080p panels at 60Hz, 144Hz, or 240Hz or a 4K 60Hz OLED panel, with the latter two offering Tobii eyetracking as well in what Dell says is a first for a 15-inch laptop. Meanwhile, the 17-inch model will only offer 60Hz or 144Hz 1080p panels (with the 144Hz option also including eyetracking).

Unfortunately, unlike the Area-51m, which offered an unprecedented level of user replaceable parts for a laptop whatever specs you buy the new m15 or m17 models are what they’ll be stuck with. The only user replaceable parts here are the SSDs, so you’ll want to plan ahead when picking your CPU, GPU, and RAM.

Tesla is narrowing the time frame for the Full Self-Driving subscription rollout. Elon Musk told Twitter followers that the pay-per-month package is now due to arrive “early next year.” In theory, you could add the autonomous features without a steep up-front cost in a matter of months. You might not want to plan your schedule […]

Tomorrow May 17, Sprint will start taking pre-orders for its first 5G phone—the LG V50 and its first 5G hotspot the HTC 5G in Atlanta, Dallas, Houston, and Kansas City, Sprint’s first four 5G markets. The devices will be delivered on May 31, so that’s when we expect Sprint to turn on its mid-band 5G […]

LG joins the cheap 5G phone race with the K92

LG just announced its new K92 smartphone, which promises 5G support for AT&T and US Cellular for just under $400. The fact that LG managed to churn out such a cheap 5G phone is all thanks to Qualcomm it revealed its budget-friendly Snapdragon 690 5G chipset over the summer, and it’s now slowly making its […]