Samsung customer support account tweeted an odd warning that, to prevent malicious software attacks on your smart TV, you should scan it for viruses every few weeks. It even included an instructional video to help you do so. The tweet, first spotted by The Verge, was short lived. Samsung has since removed it, but it existed long enough to raise a few red flags.

Asking customers to scan their TVs every few weeks seems like a stretch. It’s a bit troublesome to think our smart TVs might be so vulnerable they need such frequent updates and that Samsung would place that responsibility on users, rather than running automatic scans. 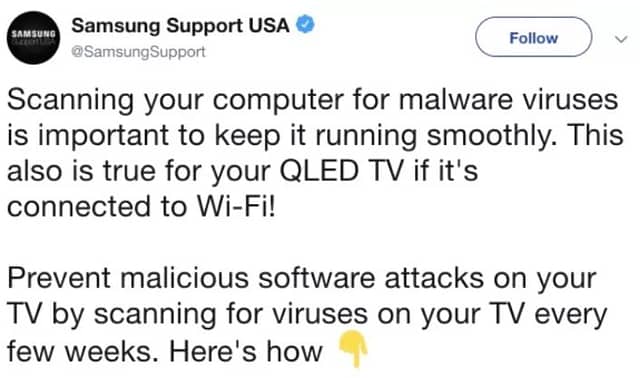 The warning seems specific to the QLED lineup. It’s unclear if the tweet was written in response to a specific threat or virus, though. This isn’t the first time Samsung has invoked fear over its smart TVs. In 2015, customers panicked over the phrasing of the company’s smart TV privacy policy, which made it sound like the TVs could eavesdrop on users. Samsung denied the possibility, but hackers have exploited smart TVs and other smart home gadgets. As we fill our homes with more connected devices, we have to accept that they each come with vulnerabilities, and we may be forced to run more virus scans than we’d like.

Mandatory Windows 10 updates aren’t new, but the latest example is raising a few questions. Users are reporting that Windows 10 is force-restarting PCs to install links to Office web apps that launch in Edge, including in the Start menu. And despite initial reports, this isn’t limited to Insider members people using standard Windows 10 […]

Apple has cut the prices of SSD upgrades across much of its Mac lineup. Rather than ditching a feature like Touch ID, Apple went with a more affordable solid state drive that isn’t quite as fast as its predecessor in terms of read speeds. Apple last week refreshed its base model MacBook Air and MacBook […]