The Alienware Alpha R2 gaming console has something to prove. When the first Alienware Alpha debuted in 2014, it failed to lure the faithful away from their Xbox Ones and PlayStation 4s. Still, its utility as a great little affordable gaming computer was undeniable.

The first major change is an expansion of the storage choices available. One of the original Alpha’s most annoying problems was its hard drive, which dragged along like a boat anchor. If you wanted an SSD, you had to buy one separately, open up the system, and install it yourself. 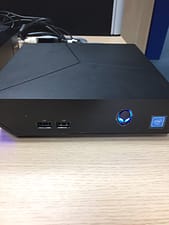 The Alpha R2’s base version comes with a 2.5-inch HDD, but an M.2 PCIe SSD is optional. Alienware will also let you configure a system with both HDD and SSD.

The other important overhaul on the Alpha R2 is its graphics subsystem. The original Alpha used an overclocked Nvidia GeForce GTX 860M chip, which was a neat feat in 2014.

Alienware has now one-upped itself by putting a full desktop Nvidia GeForce GTX 960 in the R2. Considering that typical GTX 960 video card is almost the same volume as the Alpha R2 itself (the PC is about 8 x 8 x 2 inches), that’s an impressive bit of engineering.
In a typical living room with a TV turned up to normal volume, you’d have barely heard the original Alpha’s fans while playing a game. That’s not going to drown out the tiny, high-rpm fans on the Alpha R2, but gamers who play with the volume cranked up may not mind.

The fan noise does at least pay off in cooling. The Alpha R2’s GTX 960 posted a core clock speed of 1,176MHz, a boost clock of 1,201MHz, and a clock of 1,753MHz for its 4GB of GDDR5 RAM. After enduring an hour of torture in Furmark, a benchmark designed to put heavy stress on a GPU, the clocks showed no signs of thermal throttling. Alienware did its homework.

Besides going from a mobile GPU to a desktop model, Alienware has also given the Alpha a decent CPU upgrade. While the original Alpha offered 4th-generation Haswell dual- and quad-core options, the R2 has moved to 6th-generation Skylake CPUs. You can select between Core i3, i5, and i7 configurations.

The good news is the Core i7-6700T has a healthy Turbo Boost of 3.6GHz, so the performance disparity isn’t quite as big as you’d think. In practical use, the Alpha R2 is pretty fast.

When you step back and think about it, that price isn’t out of line for a mini-PC. The Zotac EN970, a very similar bare-bones system, will set you back $730 if you buy it through Amazon. Once you add storage, RAM, and an OS, you’re looking at price parity with the Alpha R2—but with the disadvantage of an older, slower Core i5 Broadwell CPU.

Still, you’re probably thinking that for that much money, you could just buy a far more capable tower PC. That’s true, but the operative words there are “tower PC.” That’s going to be far larger. Ultimately, you’ll always pay a premium for miniaturization, whether you spend that cash on an Alienware Alpha R2, Zotac EN970, or Intel Skull Canyon NUC. If a tiny PC isn’t your thing, just drive on.

The Alpha R2’s two main negatives are excessive fan noise and inclusion of a hard-disk drive as standard. HDDs as primary drives just stink. Sure, you can fix the hard drive issue, but you’ll pay for it. The same may go for the fan noise: You may need to invest in headphones to ignore it, if you live with (or next to) people who can’t stand hearing a loud TV.

These two drawbacks don’t take away from what Alienware has done with the Alpha, though. You’re really getting a ton of performance from a machine with the same volume as a two-liter bottle. It’s capable of playing most games on High to Ultra settings at 1080p, which is an amazing accomplishment for something so small.

Apple is announcing updates for both the 27-inch and 21.5-inch iMacs. It’s updating the processors inside to Intel’s 10th Gen Comet Lake processors and also switching out the webcam to a higher-resolution 1080p HD sensor instead of the low-res 720p found in other Macs. The graphics, the vanilla configurations have either an AMD Radeon Pro […]

Good Stellar design Lots of expansion ports Twin GPUs Incredible performance Removable SSD Bad Few internal expansion possibilities No bundled keyboard or mouse No two-processor option No optical drive The new Mac Pro is a professional workhorse dressed up in a very appealing high-design package. It’s a stretch to say this is a computer for […]

The ZenBook Pro Duo has not one, but two 4K screens. (At least if you’re counting horizontal pixels.) There’s a 15-inch 16:9 OLED panel where you’d normally find the display on a laptop, then a 32:9 IPS “ScreenPad Plus” screen directly above the keyboard that’s the same width and half the height. magine a MacBook […]