With its MacBook keyboards in the spotlight again thanks to a bruising column from Joanna Stern at The Wall Street Journal, Apple today acknowledged that a “small number” of its customers are still experiencing reliability issues and failing keys when using the company’s third-generation butterfly keyboard.

In a statement, an Apple spokesperson acknowledged the issues and apologized:
We are aware that a small number of users are having issues with their third-generation butterfly keyboard and for that we are sorry. The vast majority of Mac notebook customers are having a positive experience with the new keyboard.

Casey Johnston at The Outline brought the questionable dependability of Apple’s redesigned laptop keyboards to widespread attention in 2017, combining her own frustrations with months of user complaints over the delicate butterfly-switch design that Apple switched to beginning with the 12-inch MacBook in 2015.

Apple responded to the criticism by quietly adding a rubber membrane to its third revision of the keyboard, which was meant to keep out the dust and other particles that had, somehow, led to keys becoming completely unusable on prior models. The company never publicly acknowledged it was there for that purpose, but a leaked service document confirmed as much. Apple went on to launch an extended repairs program for all styles of the butterfly-switch keyboard before the “fix” was implemented. (MacBook Pro models released in 2018 and thereafter are not eligible for this program — nor is the revamped MacBook Air.)

iFixit found Apple’s solution to be an improvement in defending against debris, but it was far from perfect, with particles like sand still able to get through and jam up the butterfly mechanism. But reports of key problems have persisted even with the third-generation keyboard. Stern wrote her column without the letters E and R to illustrate how annoying the problem is. Daring Fireball’s John Gruber similarly held back no punches when linking to the Journal’s story. He said “I consider these keyboards the worst products in Apple history. MacBooks should have the best keyboards in the industry; instead they’re the worst. They’re doing lasting harm to the reputation of the MacBook brand.” 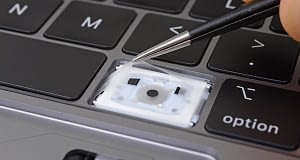 Apple’s apology is at least a recognition that this is still a problem, though the company is simultaneously trying to give the impression that it’s not a big deal. That’s not good enough. Apple will have to make some legitimate design changes over the coming months to finally distance itself from this narrative and, as Gruber said, the sinking reputation of its laptop keyboards. These are premium machines with keyboards that just aren’t up to par.

Apple is under investigation in Russia following a complaint from cybersecurity company Kaspersky Lab and may be abusing its dominant market position, Russia’s anti-monopoly watchdog. The nation’s Federal Anti-Monopoly Service (FAS) is investigating a complaint by Kaspersky Lab over the rejection of its Safe Kids app from the App Store, reported Reuters. The tech giant […]

Cortana app will stop working on phones in some countries

Microsoft’s changing Cortana strategy is about to have consequences for some phone users. Microsoft has revealed that the Cortana app will stop working after January 31st, 2020 for people in Australia, Canada and the UK. Cortana content won’t pop up in either the app or Microsoft Launcher, and a version of the Launcher will arrive […]

Twitch has announced its latest benefit for its Twitch Prime subscribers: a free year of Nintendo Switch Online service, which usually costs $19.99. The streaming site is giving out the free service in a two-stage process: first, subscribers will be able to claim a free three-month membership, and after 60 days, they’ll be able to […]