Nextbase has completely redesigned its dash cam range, with a new touchscreen interface, more compact mounting system and a brand new app. If that wasn’t enough, there’s also a choice of rear cameras, built-in Amazon Alexa and an SOS mode which automatically calls the emergency services with your location if you’re badly injured in a collision.

The new range completely replaces the old models, but prices remain the same, so the 422GW costs £129, just like the 412GW did. But as those old models are now discontinued, you’ll be able to pick them up at a discount while stocks last. However, with so many new features, it makes more sense to go for a model from the new range.

The biggest change is the mounting system. The old Click&Go was good, but it was too tall and meant the dash cam hung a bit too low on the windscreen for a lot of cars. The new system sees the mounting point moved to the front of the camera, making the whole thing a lot more compact. 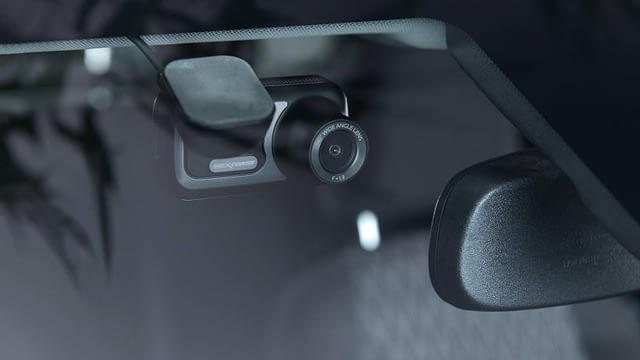 However it’s hard to remove the dash cam from the mount.

The 422GW is noticeably smaller than the 412GW it replaces, being considerably narrower, but there’s still a good-sized screen. There are only two buttons power and an emergency button centred below the screen which you can push to protect the video being recorded from being overwritten when the microSD card is full up.

Everything else is done via the 2.5in touchscreen. The new interface is simplified, with far fewer confusing icons on screen and presenting four main options when you tap on the settings cog. By default, the 422GW records at 1440p, the highest resolution, at 30fps. You can change to 1080p60, but it won’t auto switch to 30fps at night for a brighter image, so isn’t recommended.

The intelligent parking mode, which is off by default, runs from the 422GW’s internal battery. It uses the G-sensor to detect a bump at which point it will turn on and record a short clip, which will be put in the PROTECTED folder on the microSD card so it can’t be overwritten. It won’t necessarily show what triggered the recording, but it can prove valuable evidence if someone hits your car while it’s parked and then drives off in view of the dash cam.

One of the two new headline features is SOS. This works in conjunction with the new MyNextbase app on your phone. In the event of a serious crash, the dash cam will talk to the app and monitor for movement. The app will display a countdown on your phone and if the alert isn’t cancelled by the driver or a passenger, the emergency services will be notified about the incident, along with the GPS coordinates from your phone.

Nextbase is proud of this, as it’s the first aftermarket system of its type and only one of two apps that have been approved to contact the emergency services directly. The system works in other countries too, not just the UK.

You get a year’s free access, but after that it costs £2.99 per month. We’re told there will be discounts for buying an annual subscription and the option to only activate SOS for special trips, such as holidays.

The 422GW is the first dash cam to have Alexa built in. Although it works using your phone’s data connection, it enables hands-free Alexa while your phone is locked with the screen turned off, and the Nextbase Alexa skill adds some dash cam-specific functions. So you can say “Alexa, protect that recording” instead of pressing the button below the screen.

You can also get Alexa to start and stop recording, though these commands aren’t particularly useful given you probably want your dash cam to record continuously.

Video quality is largely the same as before. Nextbase says there are improvements, but they’re hard to see when you put the 412GW and 422GW’s footage side by side. However, that’s not a bad thing: quality is very good, and crucially, registration plates are almost always clear and readable when you pause a video.

There’s no fancy stuff going on to improve quality at night, so more often than not, you’ll find footage quite grainy and details such as number plates impossible to make out. But that’s par for the course with dash cams.

There is a new GPS system which runs at 10Hz, so it means your position is recorded 10 times per second. It leads to a much more accurate measure of where you were on the road at any given time, so it could come in handy if you have to prove your innocence should an insurance claim be made against you, for example.

It also means the GPS speed display (which is now shown in blue, not yellow as on the older models) is much more accurate and updates instantly.

Overall the 422GW is a good dash cam, and it’s admirable that Nextbase has managed to implement the Emergency SOS feature.

Alexa integration is great if you can get it working, but our experience was less than smooth, and you’re out of luck currently if you have a Huawei phone.

Welcome to IT Troubleshooters. I would like to thank you for taking time to visit and go over the idea for IT Troubleshooters. In this blog we will be posting fixes we have used and clear steps taking to fix. Along with reviews and tests of new laptops, tablets and other new technologies that we […]

For those of you who have missed the Government announcement tonight. The UK is now in Lockdown, you are only allowed out your house to exercise and to carry out an essential shopping trip. Keep safe all (Visited 30 times, 1 visits today)

Dash cams are one of the fastest growing areas of technology at the moment because they provide peace of mind and can save people a lot of money. The new 522GW Dash Cam from Nextbase is not only an in-car sentinel, constantly recording the road ahead, it introduces Amazon Alexa into your car’s cabin, and […]