Nvidia has a new family of Android TV-based streaming devices, as tipped early via a couple of leaks from online stores. The new Nvidia Shield TV ($149) and Shield TV Pro ($199) replace the existing Shield TV generation of hardware, which debuted in 2017. Both new Shields offer new Tegra X1+ processors, which outperform the predecessor chip by about 25%, and make possible one of this Shield’s new highlight features: AI-powered 3K up-conversion for HD content.

Both Shield TV and Shield TV Pro also support Dolby Vision HDR content, as well as Dolby Atmos surround sound. The differences between the two devices center mainly around physical design, with the Shield TV adopting a cylindrical tube design, and the Shield TV Pro looking more like its predecessor.

The Shield TV Pro also gets more RAM (3GB versus 2GB), more storage (16GB versus 8GB), the ability to transcode 1080p streams when acting as a Plex Media Server, support for the SmartThings Link to turn it into a SmartThings smart home hub and advanced Android gaming support, along with two USB 3.0 ports.

Both new set-top boxes feature Dolby Vision and Atmos decoding support the last Shield only offered Atmos pass-through and HDR 10. They’re also powered by NVIDIA’s new Tegra X1+ processor, which the company claims is 25 percent faster than the X1. That doesn’t really mean much when it comes to streaming video apps, but the additional horsepower gave NVIDIA room to develop an AI-powered HD to 4K upscaler, which can help lower-resolution content look better on 4K TVs. 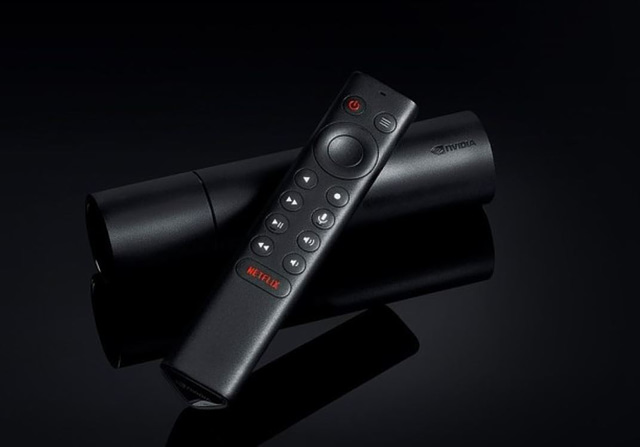 The Shield has always been strong when it comes to performance, and I don’t think you’ll find a faster Android TV experience anywhere. This kind of speed and fluidity is rivaled only by the Apple TV 4K. Netflix, YouTube, Prime Video, and other apps open near-instantly and are buttery smooth as you scroll around for something to watch. Google Assistant responds quickly, and Android TV can now be included in routines created with the Google Home app.

The Shield TV’s design is certainly unconventional. You’re not going to mistake this thing for an Apple TV or Roku. And at over 6 inches long, the Shield TV is by no means a streaming “stick.” It’s not meant to hang off from your TV’s HDMI port. Instead, Nvidia thinks most customers will either hide it behind the TV or even leave on the floor behind their entertainment cabinet.

Just like before, the new models support dual-band Wi-Fi and Bluetooth, though the latter is now up to version 5.0 instead of 4.1. In terms of software, they come with Android Pie out of the box, and they have Chromecast 4K built-in.

Both of the new devices do come with a brand new remote, which is no longer a flat slab. The triangular-shaped controller has backlit buttons that turn on when motion is detected, a built-in mic for Google Assistant queries, and a remote locator in case you misplace it. It connects to the Shield TV via Bluetooth, but it also has an IR blaster for use with your TV.

The new devices are both available starting today, with the standard Shield TV costing $149.99, about $30 less than the previous Shield TV model. The Shield TV Pro costs $199.99.

A QLED that does things only an OLED previously could, the Q90R is an exceptional telly. Samsung has clearly taken these criticisms to heart, and directly addressed them in the Q90. The new model has a visibly superior viewing angle that holds its own against an OLED TV, and the local dimming delivers deep blacks […]

The OnePlus TV is finally here

The OnePlus TV has finally been announced for real. It’s a 55-inch TV with a QLED panel, as we knew, and OnePlus says it has a “sleek minimalist design” with a “nearly bezel-less screen.” The OnePlus TV offers quantum dot color and supports both Dolby Vision and HDR10+, though OnePlus hasn’t yet given detailed information […]