Yesterday we reported Firefox users with any add-on installed found their beloved browser had reverted to its ‘vanilla’ form, as an expired security certificate meant all add-ons couldn’t be verified and thus were disabled.

Confused users headed to the Firefox subreddit and Mozilla’s own ‘bugzilla’ forums where confirmation was given of the problem. It transpired that an intermediate signing certificate had expired, which is pivotal to the verification process for extensions and add-ons. In a statement to Engadget, Mozilla’s Product Lead, Kev Needham, said “we know what the issue is and are working hard to restore add-on functionality to Firefox as soon as possible.”

This is particularly embarassing for Mozilla, not least because it’s not the first time this has happened. The same thing happened about three years ago but apparently Mozilla didn’t learn from their mistake. Certificates such as this are pretty straightforward to renew, so it’s a terrible oversight on their part.

Mozilla have been updating their customers via their Twitter, and Saturday morning confirmed they had identified the problem and gave assurances that a hotfix was about to be deployed. As of writing, the behind-the-scenes hotfix should be working so no updates will be needed on users’ side. 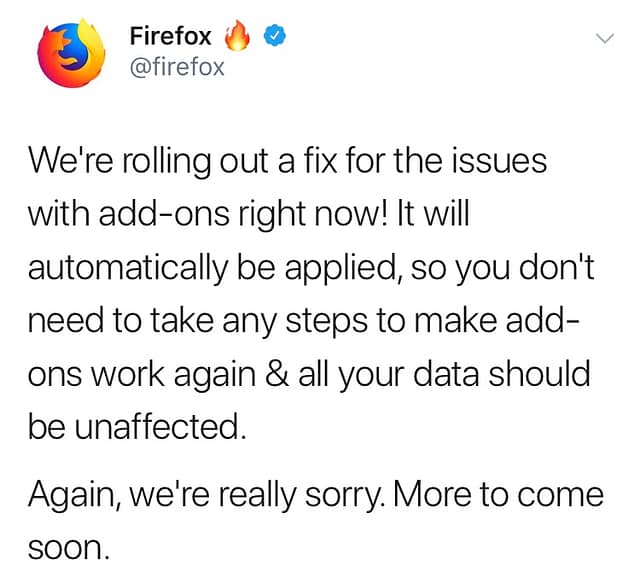 Apple’s new Mac Pro is on sale, and it starts at an eye-popping $5,999. That’s a lot of cash for the average user, but maybe not so much if you make your living on how fast your computer is. The Mac Pro is highly customizable, though, and Apple is letting potential buyers upgrade it to […]

Apple is reportedly working on a major redesign for the iMac

Apple is said to be planning to announce its long-awaited iMac redesign this year and a pair of Mac Pro refreshes are on the roadmap, too. This is all according to Bloomberg’s Mark Gurman, who says the iMac will undergo its most significant overhaul since 2012: Apple will reportedly ditch the chin beneath the screen, […]

LG TVs are already considered some of the best options for gamers, thanks to their low input lag and fast response times. The company notes that its televisions’ support of HDMI 2.1 allows auto low latency mode (ALLM), enhanced audio return channel (eARC), and variable refresh rate (VRR), and the addition of G-Sync support should […]